Of Mice and Men Wiki
Register
Don't have an account?
Sign In
Advertisement
in: Special needs, Heroes, Characters, Deceased

Shooting through in the Head 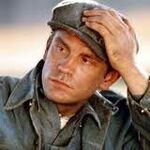 " Tell me about the rabbits George "- Lennie's famous quote

Lennie Small is a huge man with the mindset of a child. Since he is mentally younger than he looks, he depends on George to survive and to get out of trouble. Lennie is a kind, loyal and caring guy with a big heart. Lennie keeps George sane and gives George something to live for. He doesn’t like to cause problems (for fear of not getting to tend the rabbits) and he loves to pet soft things such as the puppies or the dead mouse. He tends to hurt the things that he touches but doesn’t mean to, because he doesn't know his own strength. He may not be mentally advanced but he can follow simple instructions such as bucking barley and driving a cultivator. He is very loyal to George, and their relationship has been described as a dog and his master (much more prevalent, Steinbeck described Lennie's hands as paws), and a child and his parent.

Lennie has gotten into trouble before, in Weed. Lennie saw a girl's soft dress and was touching it. She wanted him to stop. Panicking, Lennie held on to the dress. Then, George came along and wacked him in the head with a fence and Lennie let of the dress. The girl ran away and said that Lennie raped her (which he didn't). A party of men in Weed decided to kill Lennie. George and Lennie had to hide in an irrigation ditch. This caused Lennie and George to run away from Weed to Salinas.

Lennie's Aunt Clara adopted him as a child and took care of him while forfelling his extra needs. When Aunt Clara died, George was left to care for Lennie.

Because of his strength, Lennie hurts George in all the good ways. When he is petting a live mouse and it bites him, he freaks out and squeezes the mouse's head to make it stop. When Lennie was in the barn playing with his new puppy, the puppy bit Lennie and Lennie smacked his head so hard that it died. When Lennie was touching Curley's Wife's soft hair, she freaked out because he was messing it up. He didn't want to get in trouble, so he covered her mouth and shook her to try to get her to stop screaming. Not knowing his strength, he shook her too hard and accidentally broke her neck and killed her. He then ran back to the brush where George and he had camped the previous night. Then, Lennie started halluciating about his Aunt Clara. She scolded Lennie for being such a burden to George. Then, a large rabbit came out and insulted Lennie. Then, the halluciations died away. George came and told Lennie about their American Dream. He told Lennie that they could do it right now. Lennie was mega happy. Then, George pointed Carlson's luger in the middle of the brain and the spine, and shot him. Lennie died painlessly.

Community content is available under CC-BY-SA unless otherwise noted.
Advertisement